Anticipation is Half of the Seduction

Anticipation is Half of the Seduction is an exhibition that considers the heightened states of being that exist between sites of release and resistance. Whether it be found in the tension between consenting bodies or the impact of colliding objects, the dynamic movement that exists between the attraction and repulsion of energy is everywhere. Considered through artworks that both document and demonstrate through choreography, photography, sculpture and light, Anticipation is Half of the Seduction examines the uncontrollable forces of our emotions and nature.

The 2018 Emerging Curator Mentor program was focused on curatorial research and the development of an exhibition at Blindside.

Helen Grogan uses sculptural, photographic, and filmic means to approach space and spatial concepts as material(s), and is informed by studies in philosophy and choreography, . Her works directly engage exhibition sites as situations to be expanded and opened in material, ontological, and political ways. With a particular interest in framing what is already occurring, Grogan works from the perspective that the gallery exhibition is itself performative and viewers are implicated through the physical and intellectual act of observation. Grogan’s practice operates critically and dynamically with exhibition formats and institutional conditions. Works often incorporate explicit processes of flux, drift, layering, and reconfiguration as means to push or stretch potential temporalities and spatialities. By employing devices that resist fixed or prioritised points of view or points in time, her works seek an embodied attention within the present.

Christopher Boots' handmade work—including lights, furniture and objects—explores the architecture and geometry of organic shapes, and is often inspired by forms found in plants, animals, and minerals. Christopher’s Greek heritage is reflected in the fusion of natural and classical, with mythology a core concept driving his work. Christopher graduated with a BA in Industrial Design at the National School of Design (Prahran, 2005). An apprenticeship with lighting pioneer Geoffrey Mance followed, leading to half a decade of training in various design and lighting techniques. While the craft of Christopher Boots can be found in London, Vancouver, Los Angeles and Dubai, all products are made in his Melbourne Atelier with love and care by artisans—amongst them glass blowers, copper smiths, ceramicists, sculptors, and bronze casters, ensuring a commitment to superb quality. Whether for a private residence, luxury hotel, museum or public space, the work of Christopher Boots accents and complements the dramatic experience of extraordinarily designed spaces.

They have participated in a number of projects, including This _ _ _ _ _ _ _ may not protect you but at times it’s enough to know it’s there, collaboration with Amrita Hepi, Underbelly Arts Festival, Sydney (2017); Sound and Vision, Sydney Opera House, Sydney (2016); and Gucci #24 Hour Ace, LA. Long & Stent currently live and work between Melbourne and Sydney, Australia. Represented by ARC ONE, Melbourne.

Kathleen Campone is a Melbourne-based performance artist currently studying a Bachelor of Fine Arts (Dance) at The Victorian College of the Arts. Their research delves into the field of critical theory specifically queer theory, radical queerness and gender performativity. Their practice focuses on the body, in particular, the queer body as a tool for activism. Their work seeks to question and push beyond heteronormative structures of power through the ways in which we perform and construct gender. Through this, they aim to provide a framework for which queer bodies can exist outside or in excess of binary pairs. Kathleen has worked closely over the last four years with artists based in Melbourne, Sydney, and Brussels. Some of those artists include Eglė Budvytytė, Atlanta Eke, Rebecca Hilton, Sandra Parker, Emily Robinson, Boni Cairncross, Jonathan Homsey and Sarah Aiken. Kathleen’s most recent project QUEERING SPACES, is an ongoing experimental practice which focuses on the notion of interjecting queerness into heteronormative structures.

Isabella Whāwhai Waru’s name calls me to fight and to follow – in the footsteps of ancestors from whom I inherit my name and birthright. I use performance as medium for resistance//connection//transformation//clearing. They have worked in dance with Amrita Hepi for ‘Now is the Hour’ (Pieces of Small Spaces 2017 & Sugar Mountain Festival 2018) and Victoria Hunt for ‘Tangi Wai’ (Dance Massive 2017), and exhibited their own works for ‘Knots: a forced marriage story’ (US documentary currently in post-production), ‘Raranga’ for Kirsten Lyttle’s exhibition, Keteparaha (BlakDot Gallery 2018), ‘Savages’ for New Wayfinders Spoken Word Collective (KOKO KALApU 2018), ‘oneSELF’ (Melbourne Fringe 2017), and ‘Practice’ for ArTy ParTy (Treloarland 2017). As a visitor on Naarm land, Isabella Whāwhai Waru acknowledges and pays respects to the rightful custodians, the Boonwurrung and Wurundjeri peoples; who have told stories, performed and held ritual since the dreamtime only continuing what has been done on this land for thousands of years.

Euphemia Russell is a somatic and pleasure coach, facilitator, and author. They offer somatic and embodiment practices to resource their clients’ pleasure practices and habits through deep and disarmingly dorky ways. Meanwhile, they are always imperfectly in-process with their own pleasure, embodiment, and collective liberation practices.

They feel most aligned to purpose when they support people in experiences of attunement to the body’s subtleties, slow pleasure rituals, people-pleasing and appeasing social conditioning, broadening embodied choices, realising and articulating desires, embodying power and autonomy, and chronic pain.

They are of Scottish descent, born a settler on unceded Kulin Nation lands (AKA Melbourne, Australia), and a recent migrant to Lisjan Ohlone land on Turtle Island (AKA Oakland, California). They hold the identities and experiences of being white, queer non-binary, able-bodied, and born middle-class, and a trauma survivor.

Euphemia is trained and certified in sex-positive education, sexual violence counselling, somatic coaching, trauma-informed facilitation, and has a background in Community Cultural Development.

Jonathan Homsey is an arts maker and manager interested in the intersection of street dance, visual art and social engagement. Born in Hong Kong and raised in the United States of America, he immigrated to Australia in 2010 where he is a graduate of Victorian College of the Arts (BA Dance) and Royal Melbourne Institute of Technology (MA Arts Management with Distinction). His choreographic practice has evolved from a theatrical context with works such as the award-winning Together As One (Arts House, Melbourne Fringe 2013) to an interdisciplinary practice in galleries and public spaces from Footscray Community Arts Centre (Melbourne) to 107 Projects (Sydney) and Design Festa Gallery (Tokyo). He has curated dance events such as Ancestors and Anecdotes, a retrospective look at Australian dance history as part of the 20th Australian Dance Awards in partnership with Delving into Dance.

Hannah MatthewsHannah Mathews is a Melbourne-based curator with a particular interest in contemporary art and performance.

She graduated with a Master of Art Curatorship from the University of Melbourne in 2002 and has worked in curatorial positions at the Australian Centre for Contemporary Art, Melbourne (2008-16); Perth Institute of Contemporary Arts (2005-07); Monash University Museum of Art (2005); Next Wave Festival (2003-04); The South Project (2003-04); Vizard Foundation Art Collection of the 1990s, the Ian Potter Museum of Art (2002); and the Biennale of Sydney (2000-02). She is currently Senior Curator at Monash University Museum of Art.

Hannah has recently initiated an occasional series of projects that engage with choreography and the visual arts. To date this has included: Sharing Space, a 12 month program including a seminar with Andre Lepecki, a workshop and publication focused on notation across disciplines and a writing workshop with RealTime and the Next Wave Festival (2016); Action/Response, a 2-night cross-disciplinary program for the 2013 Dance Massive Festival; a 4-day workshop and performance of Yvonne Rainer’s Trio A in Perth, Melbourne and Sydney (2013); a 5-day workshop of Trisha Brown’s Early Works in Melbourne (2014); and To write, a 1-day writing program for the 2015 Dance Massive Festival.

Hannah has completed curatorial residencies in New York, Berlin, Tokyo and Venice, and has taught in the curatorial programs at Melbourne University, Monash University and RMIT University, Melbourne. She currently sits on the boards of the National Association for the Visual Arts, City of Melbourne Arts & Cultural Heritage and International Art Space, Perth. 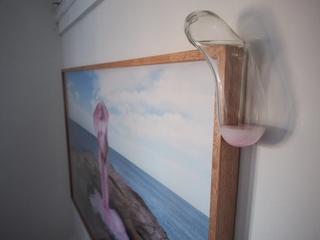